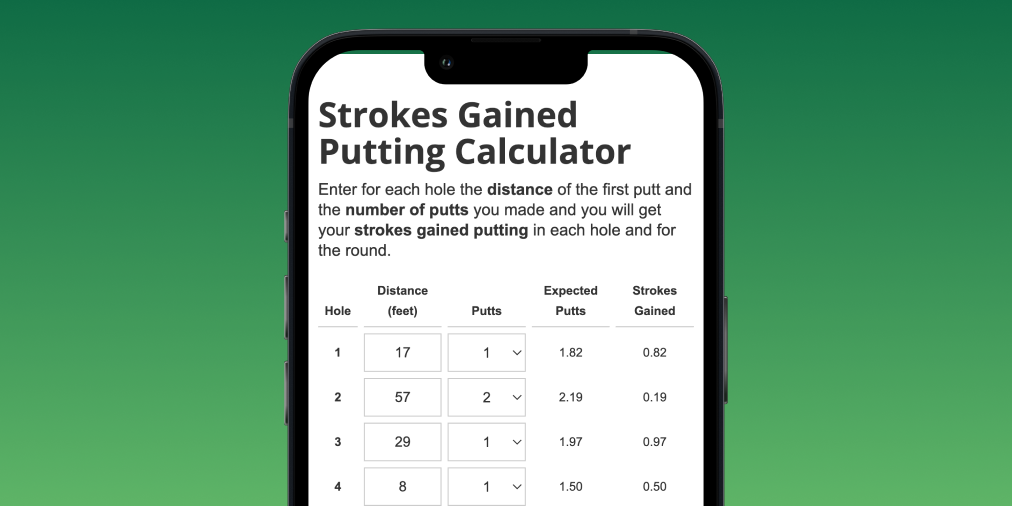 What is strokes gained putting?

Mark Broadie (the father of strokes gained) defined putts gained as the best measure of putting skill, much better than other commonly used metrics as putts per round, putts per green in regulation or even length of holed putts.

How do you calculate strokes gained putting for a hole?

Calculating putts gained for any hole can seem difficult but is actually quite easy to understand. You only need to input two pieces of data:

The calculator will give you a benchmark from your given distance, which means the average number of putts a PGA tour player needs to hole from that distance.

If we subtract the benchmark and the number of putts you took we get the strokes gained putting for that hole.

For example, imagine your first putt is 40 feet from the hole and you need 2 putts to hole in. From that distance, the average of PGA tour players is 2.05 putts. As you did 2 putts, that means you gained 2.05 - 2 = 0.05 strokes over the benchmark.

How do you calculate strokes gained putting for a round?

To do that you only have to add the strokes gained putting for all the holes in the round.

If you have holed in from outside the green in any of holes in the round, the strokes gained putting in that hole would be 0. That makes a lot of sense, as you didn’t use the putter in that hole and we can not use that hole to assess your putting performance.

If you use the number of putts per round, those 0 putts would have been very positive and could lead you to think you were putting well when maybe you were not.

Our app already shows putts gained for your round, but we have now created a very simple calculator anyone can use without entering a whole round in Golfity or even signing up for Golfity.

Please try our free strokes gained putting calculator and let us know what you think. And if you want to get many more metrics that will help you improve your game sign up for Golfity and start tracking your golf like a pro!